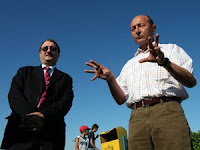 Ammunition scandal
Taiwan News, Staff Writer , Central News Agency
Page 2
2010-01-21 12:00 AM Fonts Size
The Ministry of National Defense said Wednesday it would file legal action if media reports alleging the illegal sale of its old ammunition to Angola via the Romanian presidential family were true.
Next Magazine alleged in its latest edition that relatives of Romanian President Traian Basescu repackaged expired Taiwanese ammunition destined for destruction in Bulgaria and sold it to the African nation of Angola.
More than 8,000 tons of grenades, mines and other old ammunition should have been destroyed, but the Romanians took 1,884 tons before presidential elections there last year, Next said. The military would request information from Explomo, the Singapore-based company which won the contract to destroy the ammunition.